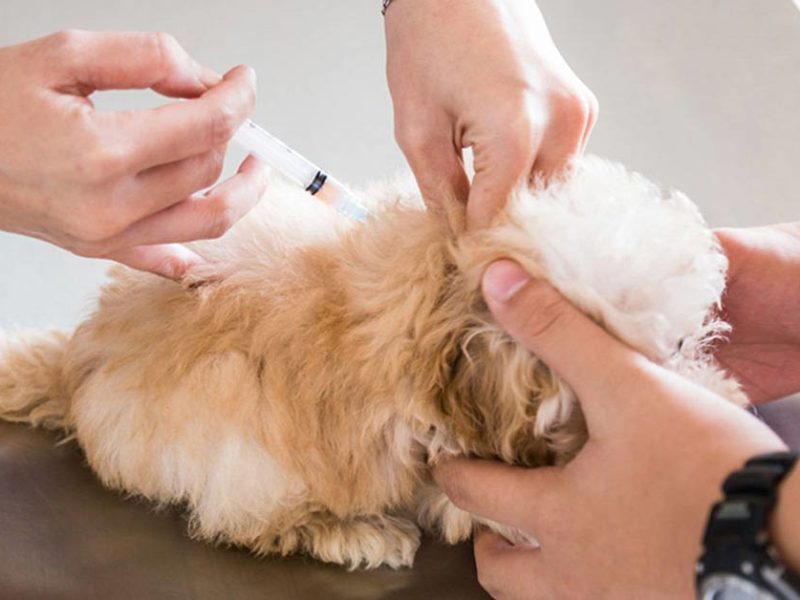 When you bring that soft, sweet-smelling little ball of a puppy into your home, you know right away that she is depending on you for, well, everything. It’s up to you to give her all the care she needs every day. It can be a little intimidating—she needs nutritious food, plenty of attention, gentle training, safe toys, socialisation, a comfortable home, and proper veterinary care. And that includes puppy vaccinations throughout her first year.

Which Vaccinations Do Puppies Need?

Going to the vet repeatedly over several months for vaccinations, and then for boosters or titers throughout your dog’s life, may seem like an inconvenience, but the diseases that vaccinations will shield our pets from are dangerous, potentially deadly, and, thankfully, largely preventable.

This highly communicable bacterium causes severe fits of coughing, whooping, vomiting, and, in rare cases, seizures and death. It is the primary cause of kennel cough. There are injectable and nasal spray vaccines available.

A serious and contagious disease caused by a virus that attacks the respiratory, gastrointestinal (GI), and nervous systems of dogs, raccoons, skunks, and other animals, distemper spreads through airborne exposure (through sneezing or coughing) from an infected animal. The virus can also be transmitted by shared food and water bowls and equipment. It causes discharges from the eyes and nose, fever, coughing, vomiting, diarrhea, seizures, twitching, paralysis, and, often, death. This disease used to be known as “hardpad” because it causes the footpad to thicken and harden.

There is no cure for distemper. Treatment consists of supportive care and efforts to prevent secondary infections, control symptoms of vomiting, seizures and more. If the animal survives the symptoms it is hoped that the dog’s immune system will have a chance to fight it off. Infected dogs can shed the virus for months.

Infectious canine hepatitis is a highly contagious viral infection that affects the liver, kidneys, spleen, lungs, and the eyes of the affected dog. This disease of the liver is caused by a virus that is unrelated to the human form of hepatitis. Symptoms range from a slight fever and congestion of the mucous membranes to vomiting, jaundice, stomach enlargement, and pain around the liver. Many dogs can overcome the mild form of the disease, but the severe form can kill. There is no cure, but doctors can treat the symptoms.

One of several viruses that can contribute to kennel cough (see above).

This is a virus that usually affects dogs’ gastrointestinal systems, though it can also cause respiratory infections. Signs include most GI symptoms, including loss of appetite, vomiting, and diarrhea. Doctors can keep a dog hydrated, warm, and comfortable, and help alleviate nausea, but there is no drug that kills coronaviruses.

When your puppy is around 12-to-16 weeks, talk to your vet about starting her on a heartworm preventative. Though there is no vaccine for this condition, it is preventable with regular medication. The name is descriptive—these worms lodge in the right side of the heart and the pulmonary arteries (that send blood to the lungs), though they can travel through the rest of the body and sometimes invade the liver and kidneys. The worms can grow to 14 inches long (ick!) and, if clumped together, block and injure organs. A new infection often causes no symptoms, though dogs in later stages of the disease may cough, become lethargic, lose their appetite or have difficulty breathing. Infected dogs may tire after mild exercise. Unlike most of the diseases listed here, which are passed by urine, feces, and other body fluids, heartworms are transmitted by mosquitoes. Therefore, diagnosis is made via a blood test and not a fecal exam. The FDA has more information about heartworm.

Also known as infectious tracheobronchitis, kennel cough results from inflammation of the upper airways. It can be caused by bacterial, viral, or other infections, such as Bordetella and canine parainfluenza, and often involves multiple infections simultaneously. Usually, the disease is mild, causing bouts of harsh, dry coughing; sometimes it’s severe enough to spur retching and gagging, along with a loss of appetite. In rare cases it can be deadly. It is easily spread between dogs kept close together, which is why it passes quickly through kennels. Antibiotics are usually not necessary, except in severe, chronic cases. Cough suppressants can make a dog more comfortable.

Unlike most diseases on this list, Leptospirosis is caused by bacteria, and some dogs may show no symptoms at all. Leptospirosis can be found worldwide in soil and water. It is a zoonotic disease, meaning that it can be spread from animals to people. When symptoms do appear, they can include fever, vomiting, abdominal pain, diarrhea, loss of appetite, severe weakness and lethargy, stiffness, jaundice, muscle pain, infertility, kidney failure (with or without liver failure). Antibiotics are effective, and the sooner they are given, the better.

Unlike the famous “bull’s-eye” rash that people exposed to Lyme Disease often spot, no such telltale symptom occurs in dogs. Lyme disease (or borreliosis) is an infectious, tick-borne disease caused by a type of bacteria called a spirochete. Transmitted via ticks, an infected dog often starts limping, his lymph nodes swell, his temperature rises, and he stops eating. The disease can affect his heart, kidney, and joints, among other things, or lead to neurological disorders if left untreated. If diagnosed quickly, a course of antibiotics is extremely helpful, though relapses can occur months or even years later.

Parvo is a highly contagious virus that affects all dogs, but unvaccinated dogs and puppies less than four months of age are at the most risk to contract it. The virus attacks the gastrointestinal system and creates the loss of appetite, vomiting, fever, and often severe, bloody diarrhea. Extreme dehydration can come on rapidly and kill a dog within 48-to-72 hours, so prompt veterinary attention is crucial. There is no cure, so keeping the dog hydrated and controlling the secondary symptoms can keep him going until his immune system beats the illness.

Rabies is a viral disease of mammals that invades the central nervous system, causing headache, anxiety, hallucinations, excessive drooling, fear of water, paralysis, and death. It is most often transmitted through the bite of a rabid animal. Treatment within hours of infection is essential, otherwise, death is highly likely. Most states require rabies vaccination. Check with your vet about rabies vaccination laws in your area.

Of course, your veterinarian should weigh in and can always provide more information and guidance if needed on necessary and optional vaccinations. 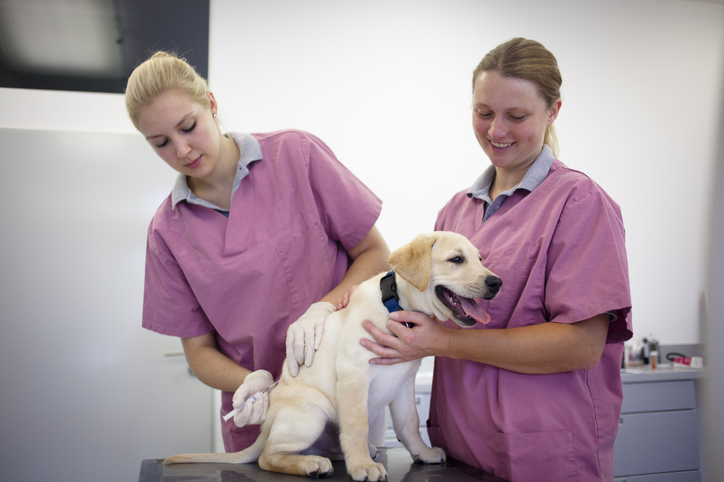 The first thing to know is that there is not just one puppy vaccination schedule for all dogs. Factors such as which part of the country you live in and your dog’s individual risk factors will come into play. Some dogs do not need every vaccine. This decision is between you and your veterinarian. Always discuss puppy vaccinations at your regularly scheduled appointments.

That said, here is a generally accepted guideline of the puppy vaccination schedule for the first year.

How much vaccinations for your puppy will cost depends on several factors. Where you live is one: Veterinarians in populous and expensive urban areas will charge more than a rural vet in a small town. In other words, there are significant differences in price. But no matter what the range in costs, some vaccines, such as the “core vaccines,” and for rabies, are necessary.

The initial puppy vaccination costs during the first year are higher than during adulthood.

Vaccinations After Puppyhood: Boosters and Titers

There is a difference of opinion about having your adult dog vaccinated every year. Some vets believe too many vaccinations in adult dogs pose health risks. But others disagree, saying that yearly vaccinations will prevent dangerous diseases such as distemper.

Many dog owners opt for titer tests before they administer annual vaccinations. Titer tests measure a dog’s immunity levels, and this can determine which, if any, vaccinations are necessary. Please note that a titer test is not an option when it comes to the rabies vaccine. These are required by law (see above). Your vet can tell you the schedule for your particular state.

And it’s all worth it. For your effort and care your puppy will lavish you with lifelong love in return. This important first year of her life is a fun and exciting time for both of you. As she grows physically, the wonderful bond between you will grow, too.

Before you reach travel destination with Pets...
August 5, 2019

Planning a trip with your pet? Here are the do's and don’ts to make your journey easier
August 4, 2019

Can't part with your dog? Here's how to travel with pets in India
August 4, 2019